Below is the photo believed to be of dead Las Vegas mass shooter, Stephen Paddock.   It appears that the individual had massive head trauma and there is a lot of blood.

This may not be a picture for those with weak constitutions.  The image originally appeared on Twitter feed of Alex Jones and picked up by Michael Savage 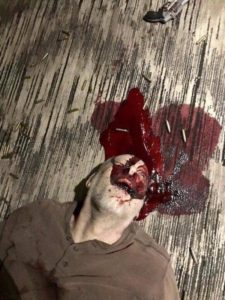 ON THE RADIO: Wahoo Out PC In